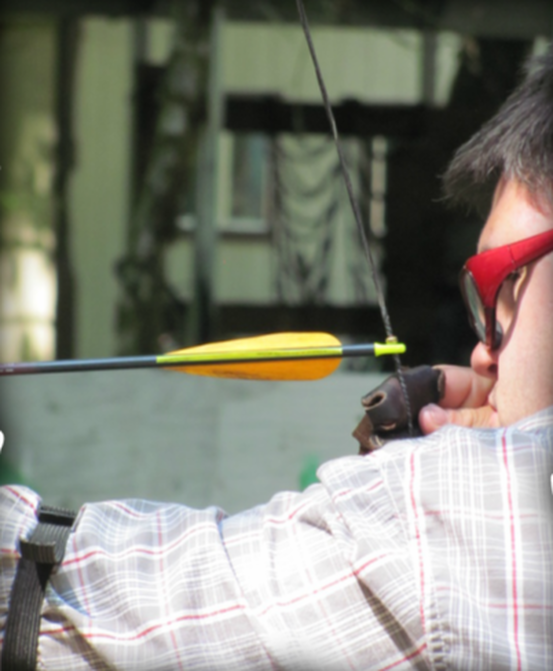 "Home for the Holidays"

Probably few people in the world were ever aware of Russell's silent passing. Russell was our friend.

I remember clearly the first time we met Russell. We were still referred to as the camp for the "handicapped". A "Quasimodo" shaped of a man in his mid sixties, he had to take a deep breath and lift the burden of his chest's weight in order to look me in the eye. I remember thinking his greatest disability could be labeled "cosmetically challenged." As he attempted to straighten his twisted body to an upright position, he tugged up his trousers by the belt with his left hand and raised his right hand to his chin to wipe a river of drool from his mouth before extending his hand to me to shake. With his outstretched hand glistening in the summer sun, it was I who took the next deep breath hoping not to reveal my reluctance as I consummated the greeting. Having been told he was hearing impaired, I began to speak directly in his ear at full volume about camp. Russell smiled, wiped the new stream of drool away, looked me straight in the eye, and said, "I know you are a Christian camp. I don't like Christian. I came to fish and eat and do my carving. No Christian stuff. I don't like it." He then resumed his hunch back posture and proceeded to take his suitcase to the bunkhouse.

A man of few words, he gave exactly the same introduction of himself to each staff person he met, declining any offers to attend campfire, chapel or Bible study. Russell did not like "Christian stuff"! He had come to fish, to eat, and to do his wood carving. That was the extent of his agenda. The staff itinerary turned out to be quite different. Russell was not the kind of guy that you just "had" at camp. Russell was   W-O-R-K! Legally deaf, socially retarded, with a bad heart, emphysema, asthma, gout, cataracts, glaucoma, a weak bladder, scoliosis, and an endless variety of medications and protocols to accompany each malady. Russell required
one-to-one assistance twenty-four hours a day. Due to his deafness, Russell yelled short commands at staff to get his requests heard. Due to being institutionalized for fifty years he was extremely protective of the suitcase containing his entire life possessions. He insisted it be carried wherever he was guided. When Russell would eat, he would have to cleaned up and where ever Russell would eat, would have to be cleaned up.

Eight summers Russell came to camp. Escorted to every corner of camp, he was assisted with walking, eating, toileting, showering, and dressing. We ran his errands and carried his suitcase. Staff got up in the middle of the night to help him to the bathroom or to hold his drool covered hand following his frequent bad dreams. Counselors took him fishing and sat with him in awe as he miraculously acclaimed his carving talents in a simple piece of wood. Nurses soaked his feet, monitored his blood pressure and charted his medications. Staff never read a Bible story to him, they never prayed (out loud) in his presence, and they never took him where any "Christian" stuff was happening. They took him fishing, and eating and to do his carving. Someone was always with Russell. Everyone got to know Russell intimately. Not everyone enjoyed doing for Russell, but the more we did, the more we loved him.

During Russell's eighth summer, while helping him to the table for lunch, Russell, lifted his heavy chest, pulled up his trousers by the belt buckle, looked the staff person in the eye and said, "I want to know Jesus loves me as much as you guys do." For the next two hours Russell talked and prayed with that staff person, recounting every sin he could remember. Asking Jesus to forgive each one, he began with stealing a piece of candy when he was ten years old. No blanket covering of sins would do for Russell. He gave his heart and his life to Jesus. Later, he joined in singing "Jesus Loves Me" whole heartedly and completely unaware his song book was held upside down.

Two years ago, this fall Russell went to spend the holidays with his new friend, Jesus. We thank the Lord for Russell and all he taught us. We know the staff that assisted Russell through the years will know in heaven the fruit of their faithfulness.

-Adapted from the short story collection, "Borne of Four", by Laura Pierce